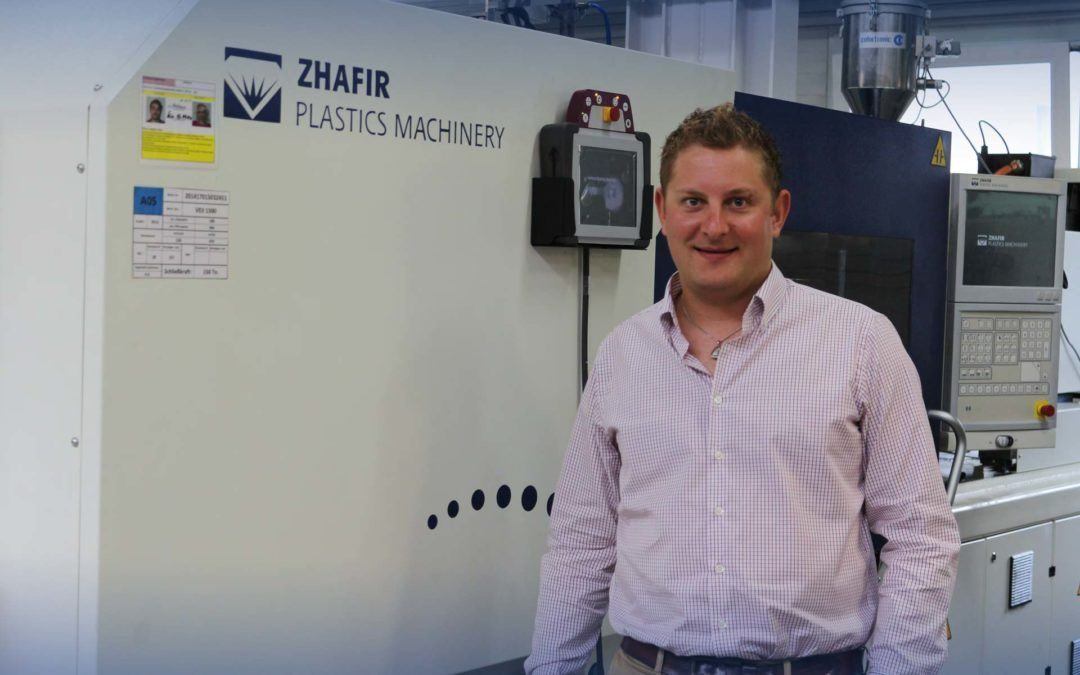 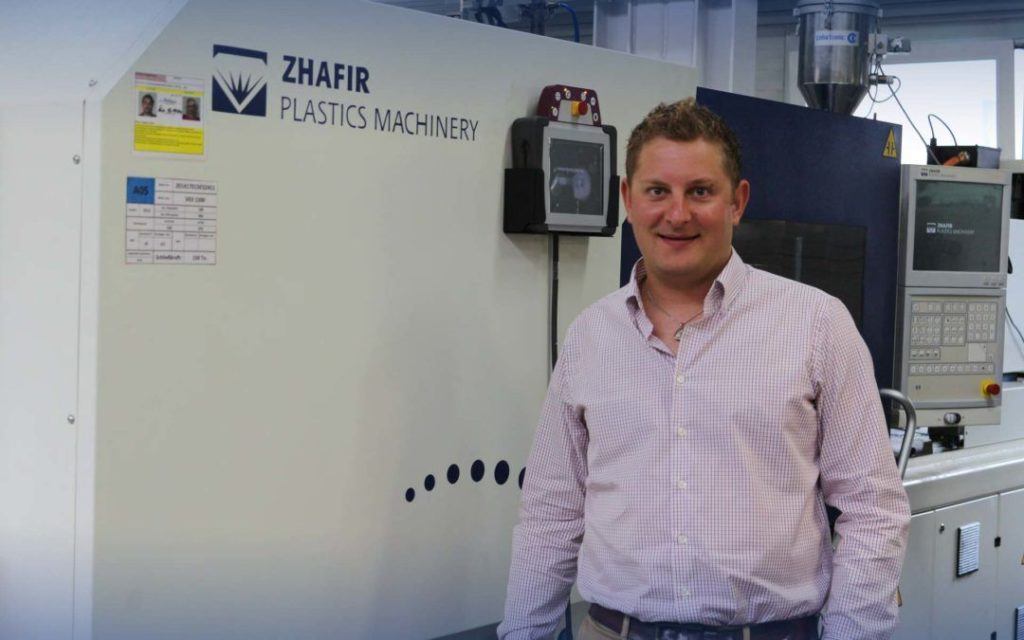 Zhafir Venus Series: „YOU ONLY GET AHEAD IF YOU TAKE ACTION“

Success in seven years, by being brave and following through: from contract work to project management – a portrait of BKW.

BKW Kunststoff GmbH is an innovative company based in Selb in Upper Franconia (Oberfranken), Germany. This plastics specialist has established itself in its seven-year existence as a project partner and piece-work injection-molding company for the most exacting of industries by offering top quality in both products and services. Its team philosophy is based on maximum flexibility in meeting the customer’s demands. Absolute customer satisfaction is the declared aim and the demands that BKW places on itself are clearly defined: “We want to deliver to our customers exactly what they want – and with speed and flexibility.”

The Bavarian plastics factory was founded by managing directors Hans Elsner and Franz Poschenrieder at a time when the market “was anything but good”. Both men are from the plastics industry and so they already came with plenty of experience behind them. And both of them, to this very day, are very down-to-earth people. They are hands-on types with brains and a clear plan, open and likeable people, uncomplicated. In early 2008 they took over an abandoned injection plant in Selb, Upper Franconia, the venerable and world-renowned porcelain-manufacturing town – not a bad place for ambitious plans, located right on the border with the Czech Republic. They found themselves with 30 injection-molding machines, mostly small ones, all of which first had to be put back into operation. A perfect start looks rather different. Yet despite this, it could have been worse. “We rolled up our sleeves and injected new life into the whole operation. Of those 30 relics, 20 machines are now running smoothly again and the rest have been either replaced or refurbished”, says Franz Poschenrieder. His words resonate with pride. They were never discouraged and stayed consistently on track, moving straight ahead without any fuss or fanfare. At first, they were still unnoticed and undiscovered by the big names in the industry. “If you want to get into the market looking professional, you have to invest. In every respect”, he says laconically and with a shrug of his shoulders. By this he means, of course, money. But he also means blood, sweat and tears, and passion. In starting up the company, they invested every minute of their time, getting down to work during the day, and sleeping at night on camp beds right next to the machines. They got things up and running right from scratch. “You only get ahead if you take action”, says Hans Elsner firmly. This seems to be BKW’s motto, in every respect. So far this young company has invested almost two million euros. In central materials supply and drying alone, they have put in well over 300,000 euros. It’s been worth it, for the whole region too. 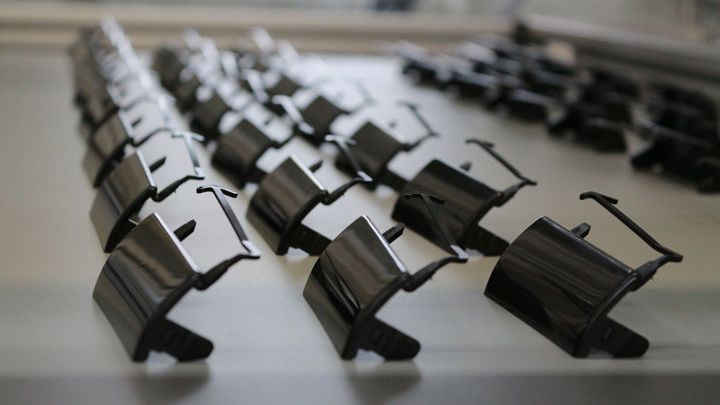 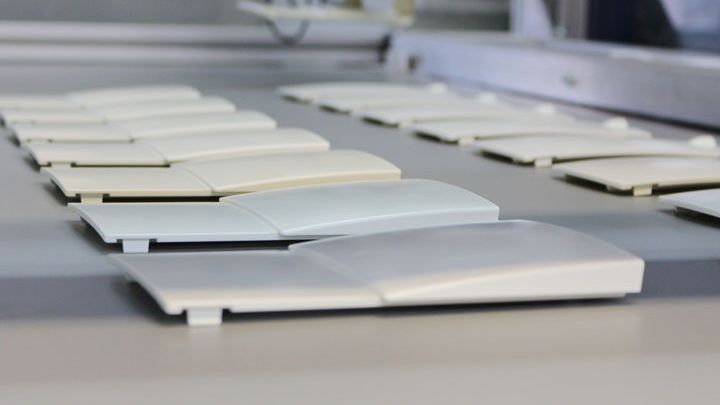 Production on second VEII1500 : Standard part for playmobil
Today the company has 48 employees, 15 of them in engineering and 5 in quality control. The fleet of machines has also grown handsomely in size and has proven to pack a punch in terms of both output and quality. Currently there are 38 injection-molding machines from 25 to 4,000 kN, four of which are all-electric Zhafir Venus Series machines of 1,500 and 2,300 kN. Most of them have 3-axis or 6-axis extraction. “Our customers are extremely demanding. They require deliveries to be on time and without interruptions”, says Hans Elsner, and he is not referring only to their customers from the automotive industry, all of whom are T1 suppliers for luxury-class vehicles. Despite the success, he remains modest. BKW enjoys an excellent reputation in the industry; low-cost production and high efficiency are their trademarks. Certainly the team is very competitive in terms of price too. “We use the global market in order to stay attractive price-wise,” adds Franz Poschenrieder. “That’s the only way we can offer all-round benefits.”

Their high degree of professional competence allows them to offer a one-stop service: product development, new project implementation, mold planning, mold design, and procurement. Plus, of course, serial manufacturing of plastic parts both single component and multi-component. One production focus is on long-flowing parts, such as light strips in car interiors, for example, with surfaces that are extremely uniform. Here, they cover not only all current standard materials in their applications but also in-demand extras such as a special compound of TPE and POM that adheres without mechanical undercutting. Poschenrieder says: “Injection molding isn’t magic. Lots of people do it. If you have a high-quality form and a solid and reliable injection-molding machine it’s not very difficult to produce a good plastic part.” And that’s what they do, and in no small measure. BKW produces and delivers around four to five million parts every month. 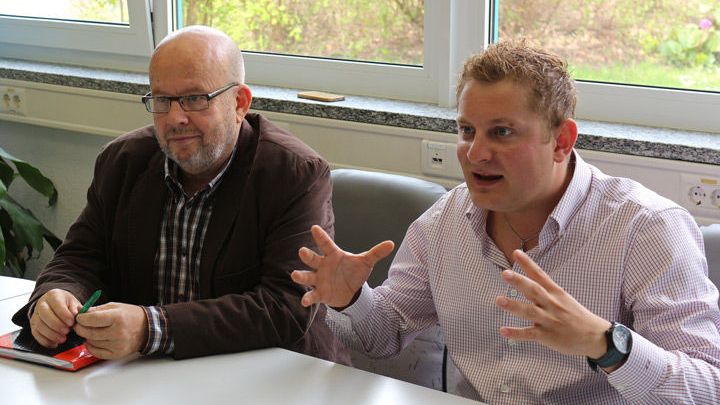 Owners and managing directors of BKW in conversation: Hans Elsner (left, Technical and Administrative Manager) next to Franz Poschenrieder (Project Management and Sales) 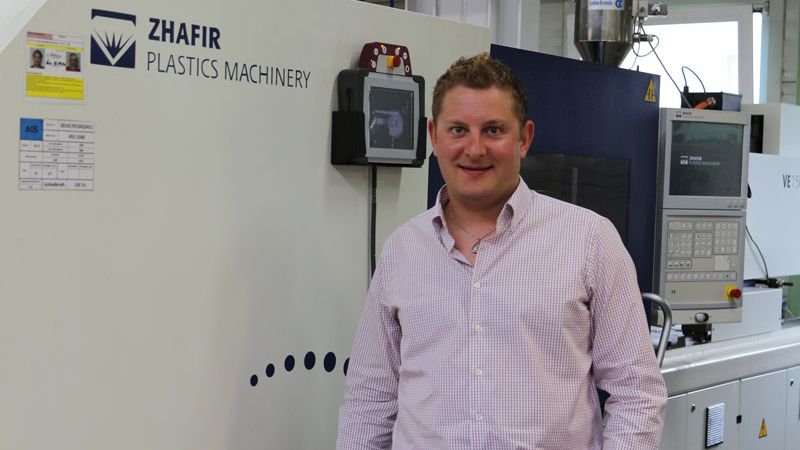 Franz Poschenrieder in front of a Venus II with 1500 kN, producing a part for Playmobil
Their annual turnover is around 5 million euros, with exports accounting for 10 per cent. Almost half of the turnover is generated in the toy industry, supplying Playmobil, among others. Another 30% comes from the automotive industry: exteriors, interiors, lighting. They generate the rest from beverage packaging and contracts of all kinds. “We don’t commit ourselves or focus on one particular industry”, both of them say. “We accept whatever suits us and our machine fleet.” Sounds simple and pragmatic, and that’s also how they want to keep operating, says Franz Poschenrieder. “You can make things too complicated. Or you can call them standard right from the outset. Take for example the injection-molding machine. It just has to serve its purpose. So, in our opinion, many of today’s options should be standard. At no extra cost. Just like it is with Haitian and Zhafir, who are already moving in the right direction.” Hans Elsner nods in assent. He too feels confident about Haitian and Zhafir machines, especially the all-electric machines, about which he is particularly enthusiastic. They already have eight of them, including four of Zhafir’s Venus series. One was added recently. The trend at BKW is clearly towards electric machines. Hans Elsner gives the essential reason for this: “Precision and energy consumption. With the two smaller Venus machines we measured just 1.8 kW over a 10-hour cycle. And that’s with extremely high precision!” In addition, there is no cooling for the oil with all-electric machines. “The maintenance and energy costs for this peripheral equipment should not be underestimated. We, at any rate, want to reduce this whole periphery”, he adds.

Franz Poschenrieder also evaluates the switch to electric machine solutions objectively and pragmatically, and he sees their decision in favour of Zhafir as a logical consequence. Proximity to the plant at Ebermannsdorf, short travel routes, and rapid reaction times, all of this, plain and simple, is what has convinced them, he says. “We got our first Venus machine in 2012 shortly after having visited Haitian International just out of curiosity at the Fakuma Show”, says Hans Elsner. After that, we just asked around in the market a bit. “The references were all positive, and now we also know why.

The team in Ebermannsdorf is very open-minded and their competence is without question. They know what they’re doing.” Hans Elsner nods approvingly. And both are also in agreement when it comes to service and customer support. “They are very open, it’s true. But also brave. They prove that with what they’re doing.” He values their flexibility, the short coordination times, and the flat command structures. Overall communication is rated as being always constructive and uncomplicated. “We like that very much”, he says. “It’s very close to our own philosophy as well.”

Haitian at K Show 2022 Servo-hydraulic technology to the Point