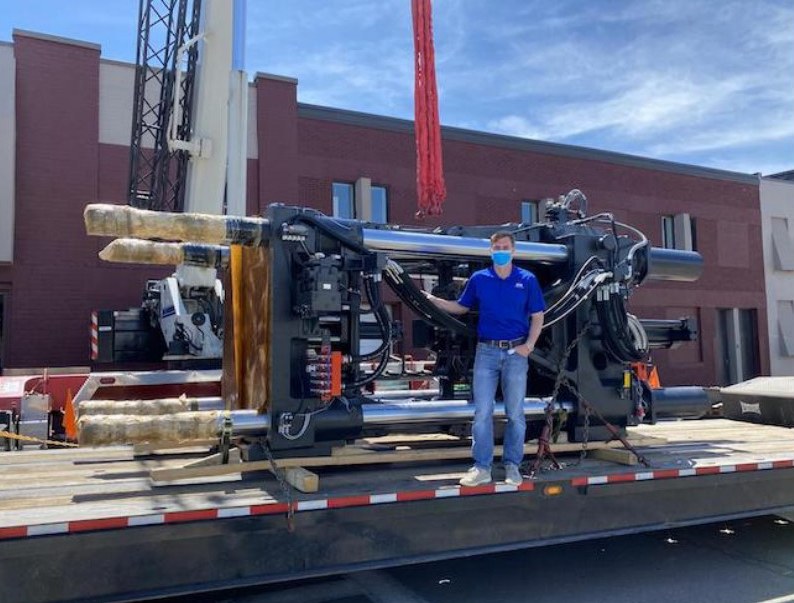 Eck Plastic Arts is a producer of plastic components for OEMs via processes that include vacuum forming, injection molding, and fabrication of sheet plastic. The company caters to industrial equipment manufacturers serving markets that include medical technology and defense equipment.

The new MA 9000 II S is four times larger than Eck Plastic Arts’ next-largest press. “When looking to grow our business, we realized it is not hard to find work for a molding machine this size,” said Brett Pennefeather, President. “At the time the machine was ordered, we had one project lined up for the 1,012-ton Mars. Now, five other projects are lined up right behind that.”

This is the first Haitian press purchased by the company. Pennefeather noted that he chose the machine because of its easy-to-use tie-bar puller. “Our ceilings top out at 11 feet and machines this size are about nine feet high. The only way to install or change out a mold is to load the mold from the side,” he said. “We ordered the MA II S with an automatic tie bar puller that was on the preferred side of the machine and that operated with a push of a button. The lead time on this customized option was shorter from Absolute Haitian than from competitors, and other competitors’ tie-bar pullers were not automatic.”

Preparing for delivery of the machine was challenged by the rise of the coronavirus, since a new concrete floor had to be poured and new electrical and plumbing services installed while keeping employees and contractors safe. Delivery of the large-tonnage machine was equally challenging as the riggers, Rogers Service Group, had to navigate several tight intersections and a narrow delivery dock. “The clamp alone weighed some 50,000 pounds and was assembled outside and then rolled into the building, Pennefeather added.

The first product being made on the MA II S is a souvenir drinking cup shaped as a baseball bat and sold at major and minor league ballparks. “The delay in opening professional baseball ended up working in our favor as it took the fire drill out of starting up the machine,” admitted Pennefeather. “It gave us more time to make sure everything was assembled properly, and auxiliaries were hooked up correctly as we familiarize our team with this new machine.”